My ferret, Pixel, has passed away 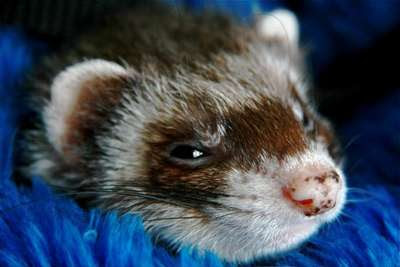 On July 28th, 2009 at around 8AM Denmark-time, my ferret Pixel, not wanting to wait for her sleepy owners to get out of bed and let her out of her room for the usual ritual of morning ham or chicken, took matters into her own paws.

At around 8:30 a neighbor contacted us to report Pixel was on the ground outside the front entrance of the apartment block, not moving.

She had fallen six floors to her death.

Pixel was always an impatient girl, and smart enough to remember that she had made this Houdini escape once before. It was just a matter of being persistent enough to climb to the top of her cage, jump across a 1-foot (30 cm) gap to the window sill, squeeze herself through the partially-open window, and head for the nearby balcony, where she could scratch at the door to get our attention. She likely tried to turn around on the short window ledge or the balcony railing looking for a good spot to jump down into the balcony, and lost her balance.

When I arrived on the ground floor, her body was already beginning to cool. I took her upstairs and realized it was probably a very quick death, as I could see she hit the ground chin-first. One of her front paw fingers appeared to be broken too.

My girlfriend and I blame ourselves for two mistakes: first, I had left the window partially open to allow a breeze to keep the room cool during the day, and secondly the girlfriend did not put Pixel back in to her cage before going to bed (I was at work at the time) and only closed the door to my office, where Pixel's cage is. In itself this is not unusual, because it was common to find her curled up inside a blanket or sleeping-bag *outside* the cage next to my computer desk. She preferred to be nearby whenever she had the chance, so if we found her sleeping we just left her alone and closed the door to the room when we had to leave the apartment without her. The big error was in leaving the window open overnight, giving Pixel her opportunity the next morning.

She was 6 years old - that's roughly 55-60 years old in human terms. Her birthday would have been this week. While sometimes acting like an old lady, she still had the attitude and energy of a kid. Even after 2 tumor surgeries, she never gave up enjoying her life with every waking moment.

Pixel was a remarkable ferret, energetic, quite intelligent for someone of her size, and an ambassador-of-sorts in educating people young and old about ferrets and what wonderful pets they can be. She was capable of displaying a wide range of body language and small facial expressions that made her more of a "little person" to me than just an animal.

She was my first pet after arriving in Europe, and she will not be the last. She brought joy to my life (and to others) that no other animal has to-date, and I will miss her terribly.

I post this to let people who knew her -- either through pictures, video, or heard her laughing/dooking over SL Voice or Skype as she played with me -- that she has passed away.

No memorial is needed - beyond this blog post. Online cemeteries and virtual worlds are inadequate or incomplete for me to properly express my loss. Perhaps you will understand if I occasionally babble-on with stories about her antics and adventures in future blog posts. She meant a lot to me in so many ways.

Since she loved to dig in plant dirt, I had her sent off to be cremated in the hope that she gets 'play in the dirt' forever in someone's garden.

Photos of her can be found here: http://picasaweb.google.com/jimm.pratt/PixelPics#

-Jimm
Posted by digitalmouse at 20:31